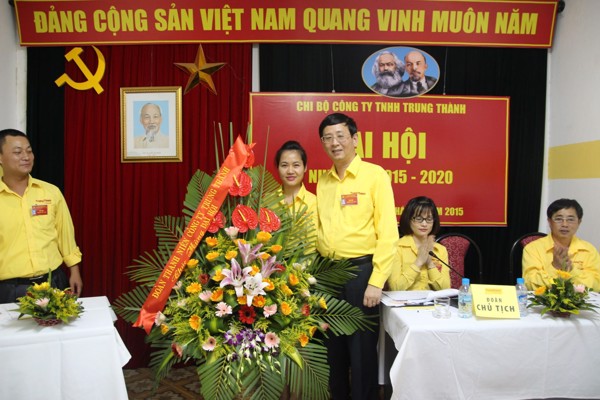 During the term 2010 - 2014, TrungThành Cell of party under the leadership of Cell secretary and Chairman – General Director of TrungThành – Mr. Phi Ngoc Chung promoted the role of Party organizations in the whole process works of the business.

In the work of building the Party, TrungThành Cell of party has strengthened to lead, innovate, improve the effectiveness of political, ideological. The propaganda contributes to raising awareness and traditional education, motivates staff, employees, union members of the company striving to fulfill the tasks assigned.

Speaking at the congress, Mr. Phi Ngoc Chung appreciates the efforts of the staff and employees about accomplishments achieved in recent years. "I wish you try more and more to promote the production and business activities, constantly improve the quality, complete all targets and tasks assigned", he said.

Mr. Phi Ngoc Chung said, in the coming term, company’s cell of party need to lead and direct to promote  production business, investment and development, to arrange, renew and improve the quality and efficiency of operation of each department or unit.