In order to celebrate the Entrepreneur Vietnam October 13, Economic Commission of the National Assembly, the scientific history of Vietnam, Training centers, consulting and economic information (CETAI) - The Industry Club Vietnam trade show organized "Useful to the country and the people", honoring Vietnam entrepreneurs in the new era and honor "the Vietnam Industrial and Commercial excellence - 2014" on the morning of October 5th, 2014.

With a positive contribution to the cause of "Convergence - Enrichment - International Architecture - Tradition" of the Vietnam Trader-  Entrepreneur, Chairman - General Director Phi Ngoc Chung was honored to be honored and awarded The excellent trader in 2014. Interview at the ceremony, Chairman - General Director of Phi Ngoc Chung said: "This year is the 10th anniversary of the Entrepreneur Vietnam’s day and TrungThành also has 19 years old. To be honored such as today, I and TrungThành was struggling, trying a lot, especially in the context of the economy more difficult. But "Fire proves gold, adversity proves men," through difficult times, TrungThành well as other company and has been increasingly clear tempered nature "pure gold" in the field of business and entrepreneurs.

We will promote the spirit of serving the country, I and TrungThành company also like the Trader and entrepreneurs Vietnam vow to hold fire the will and determination to overcome any challenge, rise and worthy of period expectations of the Party, State and people ". 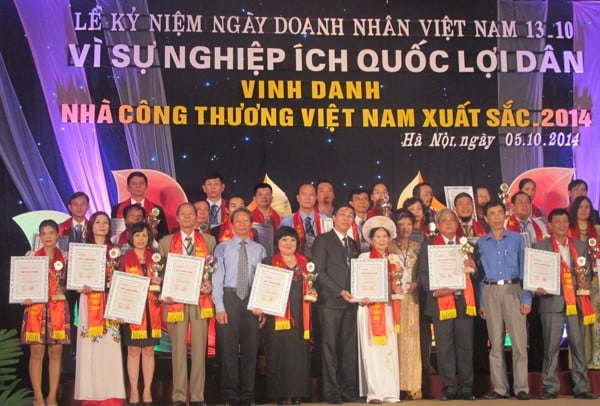 Chairman - General Director Phi Ngoc Chung (The second from the left, the top row) take a photo with the excellent trader 2014

The one of the activities of the program, in the afternoon previously on October 4th, 2014, representing the typical entrepreneur has taken notice of the ceremony, offering incense at the altar of President Ho Chi Minh in the Presidential Palace and the altar of General Vo Nguyen Giap ( 30 Hoang Dieu, Hanoi ). The Organizing Committee would like to program the sacred fire from the altar of President Ho Chi Minh to light in the " Useful to the country and the people " and honored "The excellent trader 2014”.

At 17 hours on this day, the entrepreneur attend the program has met with Mr Uong Chu Luu, member of the Party Central Committee, vice chairman of the National Assembly of the Socialist Republic of Vietnam. At the meeting, the entrepreneur has to report about business and manufacturing, share difficulties and expressed the hope, faith in the revised breakthrough of the Enterprise Law (revised) in next meeting of Congress.